Today was my first opportunity to help clear invasive French broom, thistles, annual grasses, and seedling Monterey pines from around the highly endangered pallid manzanitas up at the eastern edge of Joaquin Miller Park.  And I learned why Friends of Sausal Creek holds these workdays so infrequently up here, and only in late summer.  It is because of a non-native pathogen, Phytophthera cinnamomi, which is known to infect manzanitas and which is apparently most readily communicable in moist conditions.  And so, as a first (literal) step, we bathed our shoes in rubbing alcohol (by stepping in a pool of it in the white tub visible in this next photo) and used tools which had been similarly sterilized.

If the name Phytophthera sounds familiar, it is not surprising, for it is the same genus of organisms responsible for the Sudden Oak Death that is toppling so many trees in nearby Redwood Regional Park and elsewhere.  And it is the same genus of organisms that caused the Irish Potato Famine, which in turn led to so many of our forebears crossing the ocean, and the continent, in time to help fell the mighty redwoods that stood a stone’s throw from this little manzanita hilltop. Biology and history, intertwined as tightly here as anywhere…but I shall leave that for a subsequent post.

As you can see illustrated in the photo below and to the left, one of the several causes of the precipitous decline of the pallid manzanita both here and over on the East Ridge of Redwood Regional Park is the planting of non-native Monterey pines and cypresses, which shade out the sun-loving manzanitas and alter the soil by dropping voluminous quantities of leaf litter; and — my inference — by vastly increasing the summer moisture in the soil by means of the same fog-drip mechanism that is so vital to the nearby redwoods but perhaps not so salutary for the dryness-adapted manzanitas. (And, a timely reminder — clicking on any of these images expands them greatly, as they are all taken and uploaded in high-resolution.  Clicking on them is highly recommended!)

And, if that were not enough, up until approximately 2003 this stand was heavily French broomed, with a residual seedbank formidable enough that even now, in September 2011, the young broom plants were as dense as this in several areas:

Emphasis on “were,” for the preponderance of these broom seedlings got pulled today!  Together with much of the thistle, many Monterey pine seedlings, and lots of panic veldt grass, hedgehog dogtail, and rattlesnake grass — great names, but not so great for the germination and survival of young native plants. And, with so few individual pallid manzanitas having survived the multitude of novel threats facing them, every seedling is precious beyond reckoning.

And it seems that what the Friends of Sausal Creek are doing is working, and brilliantly so.  For I saw no manzanitas that looked ten years old, nor even twenty. But I saw lots of these, vigorous young plants that clearly have germinated and flourished since the first broom removals began here in 2003.

Here is a Flickr slideshow of photos from the day: 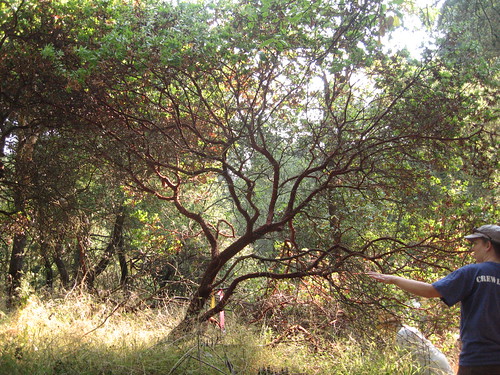 And here is a short panning video of the knoll, showing manzanitas, invasive grasses, cypresses, pines, native oaks and madrones, and restoration volunteers! Skyline Blvd. is just below.

(This looks great in full screen!)

This entry was posted in Sausal Creek Watershed. Bookmark the permalink.